Yeast beckons my grandmother’s command.  For as long as I have lived, she has been queen of sweet breads and rolls of any kind.  This skill coupled with her generosity has always made her the most popular woman at church.  Sadly, no one else in the family inherited her gift.  Sure others try and occasionally succeed, but grandma Helen is in a class all her own.  Once I rang her for a tea ring recipe after she’d gone to bed early.  In the darkness of her bedroom, she rattled off the recipe to me by heart before hanging up and going straight back to sleep.

All this said, I feel like I’ve been letting down the side.  I bake and cook more than anyone in my family and still I live in fear of yeast recipes.  I hide from them like they’re the boogie man.  I refuse to make them out of fear of failure.  Well not anymore.

Last night, I made bread for the first time in almost ten years.  Sure I’ve baked the odd batch of sweet rolls here and there, but it’s been an absolute age since I attempted baguettes or pains rustiques.

The recipe I used was Mireille Guiliano’s from her book “French Women Don’t Get Fat.”  Circa 2004, I was given the book as gift and in it were some wonderful recipes.  For a while, I baked her baguettes every weekend.  The link to her recipe is here.

My bread was good.  It tasted great, had a fantastic crust, and sounded hollow when tapped on the bottom.  It even had nice bubbles from pockets of air that you can see in the cross sections.  However, it looked nothing like a baguette.  No fault of Mireille’s.  I just need to practice my shaping technique.

Tonight I gave myself a mulligan.  I redid the experiment but changed a few things.  I made the same dough recipe, but shaped and baked it differently.  Instead of several baguettes, I made two large oval shapes.  Because they were bigger, I increased my baking time.  25 minutes at 450ºF/Gas 8/ 230ºC and 20 minutes at 400ºF/Gas 6/200ºC.  I lightly oiled the baking trays and sprinkled them with cornmeal before putting the loaves on to rise a second time.  Then before baking, I sprinkled one loaf with cornmeal and brushed the other with milk before sprinkling it with cornmeal.  As you’ll see from the pictures, the milk made no difference.

James Beard once said, “Good bread is the most fundamentally satisfying of all foods; and good bread with fresh butter, the greatest of feasts.”  And as my mama would say, “I’ll stop him when he’s wrong.” 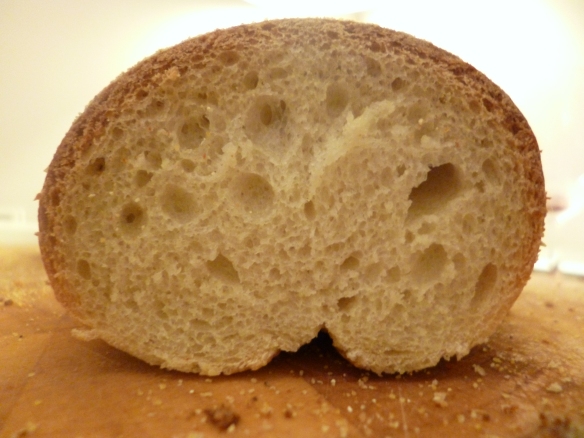 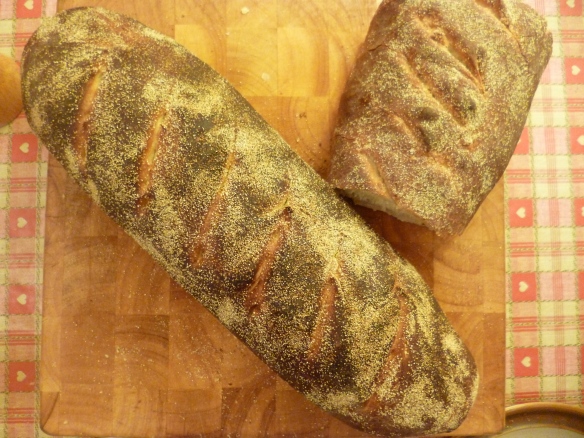 10 thoughts on “More to Loave”