Haute cuisine–so many foams and such small portions.  I can’t say it’s for me.  Tasting menus of this nature leave me as bored as a small child in church.  Also, I am quite fussy on my own; I don’t want my food to be.  I am not sure if this makes me of the old or of the new guard.  So allow me to claim the comfy guard, the common guard, as it is cuisine bourgeoise I love.

Home-style dishes one’s grandmother would have made is what I want to eat.  Not exclusively, but most days of the week.  Dishes that are simple yet executed with impeccable technique.  Dishes that are classic for a reason.

In France, I have eaten many meals.  The best I’ve had was not prepared by a Michelin starred chef but by a humble vigneron near Mount Ventoux.  His pork rillettes remain peerless in my memory as do the squash blossoms he grew in his garden and sautéed with wild garlic.  Never mind that he hailed from Yorkshire or that his wines weren’t very good.  The recipe for his rillettes came from an old woman in his village and the result was so tender and savory it tasted like butter made from meat.  Since that meal, I have yet to taste rillettes more perfectly spiced.  No one flavor note stood out above the others drawing attention to itself like a greedy songbird of a soprano revelling in her role as Carmen on closing night.  Instead, the seasoning was all harmony like the finale of Mozart’s Le Nozze di Figaro when eight voices meld into one beautiful thing.

Oh, love.  L’amour.  It is many things.  To quote Georges Bizet, “L’amour est un ouiseau rebelle.”  And that may be, but the one thing l’amour n’est pas, at least where I’m concerned, is la cuisine nouvelle.  ( I know it should be nouvelle cuisine, but the eye rhyme is better with rebelle and nouvelle.)

Docteur Édouard de Pomiane also known as Édouard Pozerski was a scientist by profession and a cook by hobby.  Eventually, this hobby became his second profession.  He was the son of Polish emigrés who fled Poland for France and settled in Paris after the Revolution of 1863.  De Pomiane invented gastrotechnology.  He was also known for his straightforward writing and disdain of haute cuisine.

Elizabeth David wrote about him in an essay entitled, Pomiane, Master of the Unsacrosanct.  “Adored by his public and his pupils, feared by the phoney, derided by the reactionary, de Pomiane’s irreverent attitude to established tradition, his independence of mind backed up by scientific training, earned him the reputation of being something of a Candide, a provocative rebel disturbing the grave conclaves of French gastronomes, questioning the holy rites of the ‘white vestured officiating priests’ of classical French cookery.”

David’s essay includes a recipe for de Pomiane’s tomates à la crème.  Despite the French name, de Pomiane claimed the recipe was Polish and came from his mother.  What is striking about the recipe is its simplicity.  Only three ingredients are required–butter, tomatoes, and thick cream.  It’s laughably simple.  A child could make it.  Yet the marriage of these basic flavors yields a dish that is equal parts sophisticated and subtle.  I’ve been making it for days now.  And so long as it stays this cold, I will continue to do so.  As nothing makes me quite so happy at lunchtime as les tomates de Mère de Pomiane’s.  Well that and a little Mozart. 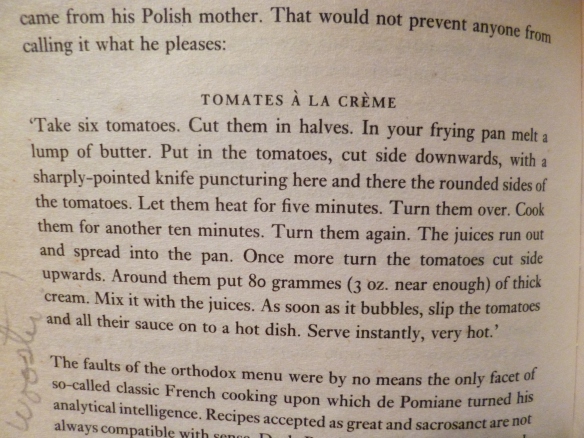 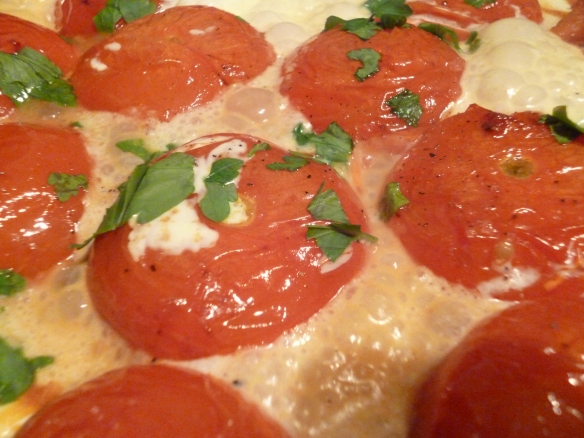