Recently, I failed spectacularly at something. Not only did I fail, but I did so in front of one of my heroes. Want to hear about it? Of course you do. Schadenfreude is real. So get comfy, keep reading, and consider this a gift.

A few weeks ago I saw that my favourite bakery in London was in need of a new baker. Despite never having worked in a professional kitchen or having attended a cooking school, I decided to say what the fuck and give it my best effort. I composed the most thoughtful and succinct email I could and sent it off, never expecting to get a response.

Imagine my excitement when I received a reply inviting me to an interview and instructing me to bring along two different baked goods to taste. I thumbed through all my cookbooks for inspiration. I reread my recipes here. After days of waffling, I decided on a lemon chess pie or what I like to call a Blue Horizon pie and something completely new.

I wanted to bring in a layer cake as this bakery specializes in them, and while I do the classics rather well, I wanted this one to have a touch of the exotic. Cardamom sponge with marmalade mascarpone is what I made. The sponge was Melissa Clark’s from her Cardamom Cream Cake recipe featured in The New York Times (with omission of the rosewater), but the syrup to soak the sponge and the marmalade mascarpone were all mine.

The morning of my interview, Storm Doris was blowing up a gale. And there was a tube strike. I left the flat at 7:15 which I thought left me ample time to get to the bakery by 9 a.m. Keep in mind that my arms were full of an enormous cake box and a pie. Both of which I managed to carry north of the river and through three train stations without a hitch.

When I exited the last train station, I figured I’d get a cab the rest of the way. Nope. There wasn’t a single one. So I thought I’d do what any person living in a city in 2017 would do. I ordered a pickup from Uber. Due to the weather and the strike, traffic was terrible. The car took forever. My heart felt relieved when I got a notification saying it was arriving. Then, I got a notification saying it was cancelled.

The driver cancelled! I didn’t even know that was allowed. And I’d been standing in the rain. Holding a cake box and a pie. I didn’t know what to do so I just headed in the general direction I needed to go. That’s when I saw a cab. Who drove right past me.

I checked the time. It was 9 o’clock. I called the bakery to say I was so sorry but I’d be at least another 20 minutes. I kept walking. Finally a good Samaritan asked if I needed help. I explained everything to her and she said she was taking a bus to that area and I should follow her.

As I boarded the bus, a manchild with an enormous backpack pushed past me and I dropped my cake, I dropped my pie, and I almost started to cry. After picking them up, I reached into my pocket for my ATM card which is how I swipe in and out of public transportation these days. It wasn’t there.

I begged the driver to let me off. I took a minute and screamed like a madwoman in the street then I started to retrace my steps. Mercifully I found my card on the pavement three blocks back in the same spot where I had pulled out my mobile. As I stood there in my soggy coat, with my frizzy hair, and my busted baked goods, I thought about calling it a day and going home.

For whatever fool-headed reason, I decided to keep going. Call it my Elizabeth Warren moment because. . .

When I made it to the bakery and they asked who I was I said I was the hot mess who was embarrassingly late to meet with the owner. Believe it or not, she ate my broken cake and my pie. She even had her staff sample them too and I got called in for a trial day. I didn’t get the job and if I’m honest, I never expected I would. Actually, I never expected an interview. But I am very proud of this particular failure. Without it, I wouldn’t have this story to share nor this recipe. I hope you enjoy them both.

Broken cake is the best cake.

In a medium bowl, lightly whisk together the egg whites, milk, and vanilla.

In another bowl, combine the flour, sugar, baking powder, cardamom and salt with an electric mixer on a low speed. Only about 30 seconds to blend. Add the butter and 1/3 of the milk-egg mixture. Mix on low until the dry ingredients are moistened. Increase to medium and beat until everything is smooth.

Pour into the prepared tins and bake for 25-35 minutes or until a tester comes out clean.

Allow the cakes to cool in the tins on a rack for 20 minutes before unmolding them.

While the cakes finish cooling, make the syrup.

The juice of 2 oranges

the contents of 4 cardamom pods

Bring all ingredients to a boil and simmer until reduced by half. Let the syrup cool completely before using it.

85 g marmalade (I use my own homemade which is not as sweet as most commercial brands. Take this into account when making your frosting. If your marmalade is sweet, you will not need as much sugar.)

the zest of 1 orange

To assemble the cake:

While your cake layers are still on the rack, brush them with some syrup. Be sure to get their sides as well as their tops. Beware you don’t saturate the cakes. You only want to add some moisture, not make them soggy. Leave them for a minute.

Select a cake plate or a stand that you want to use.

Put wide strips of wax paper around the plate.

Place your first cake layer on top of the paper. This will make cleaning up much easier.

Spread some of the marmalade mascarpone onto this layer. I like it about half an inch thick.

Put the second cake layer on top. Repeat with the marmalade mascarpone.

I coiled a piece of orange shred from my marmalade and placed it in the center of my cake. You don’t have to, but I think it looks nice.

Remove the strips of paper and you’re ready. 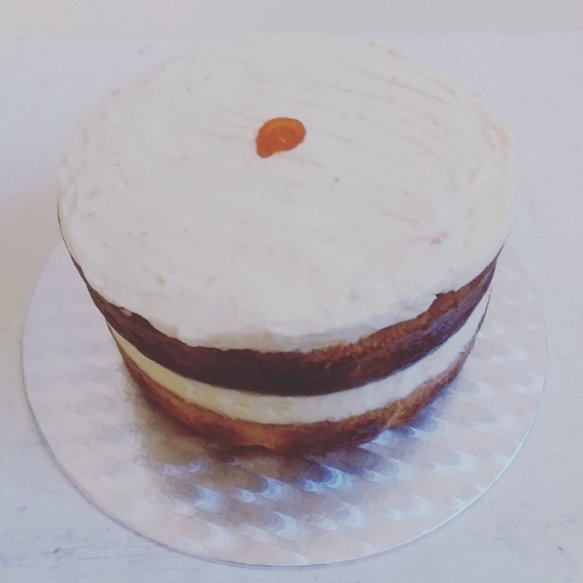