My darling husband, Henry, eats like a Dickensian fat man.  Don’t get me wrong.  He likes and eats plenty of fruit and vegetables, but what he really loves is meat, game, offal, wine, port, sherry, and cheese.  My point is he’s just not that into sweets.  He eats them to indulge me, but for the most part, my baking endeavors are lost on him.  He’d rather have another helping of roast beast.  That said, there is one thing he never shies from–apple pie.  Below is my recipe for apple custard pie.  Is it good?  Well Henry asked for seconds so yeah.  It’s really good.

1/2 the dough from Only the Best Brisée Ever

First, preheat the oven to 400°F/200°C/Gas 6.  Now we’re going to prepare the pie shell.  Roll the cold brisée dough as thin as you can.  I roll mine on baking paper so I can easily flip it over into my tin.  It’s a really easy way of doing things.  Cut the edges and roll or crimp them however you like.  Prick the bottom of the pastry shell with a fork and brush the edges with egg.  Line the shell with foil or baking paper then pour in some pie weights.  Bake for 20-25 minutes.  Remove the weights and cool completely.

While waiting for the pie shell to dry, heat the 1/4 cup of apricot jam and the tablespoon of dark rum in a saucepan over low heat.  Stir often and when it starts to look like a glaze, remove it from the heat.  Strain the mixture into a little bowl.  When the pie shell has cooled completely, brush this glaze along the bottom and sides of your shell.  Allow it to dry. Now onto the custard.

In a large bowl, combine 1/4 cup flour, 1/3 cup sugar, and the zest of a lemon.  Using a wooden spoon, stir in three large eggs.  Set this aside.

Heat the 3/4 cup heavy cream in a saucepan on medium heat.  Just as it begins to boil, turn it off, and allow it to cool for a minute.  Then quickly whisk it into the egg mixture.  Add 2 teaspoons vanilla bean paste.

Peel and slice the apples.  Sauté them in butter with a teaspoon or so of cinnamon and some freshly grated nutmeg.  Allow the apples to soften but do not let them get mushy.  Squeeze them with lemon juice and stir just before removing them from the heat.

Arrange the apple slices in concentric circles in the pie shell.  I use two forks to do this.

Now pour the custard over the apples and sprinkle with cinnamon sugar. 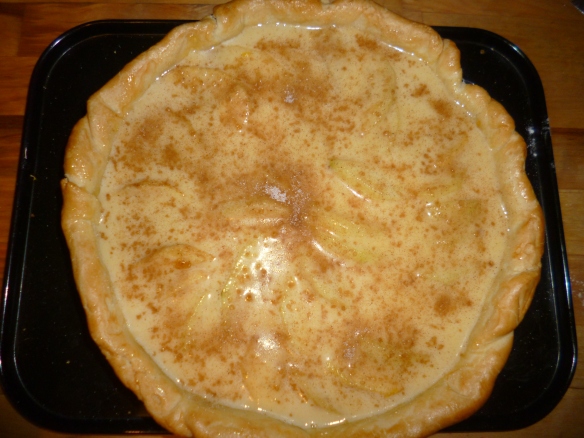 Bake at 350°F/180°C/Gas 4 for 25-30 minutes or until the custard has set.  Once it has, allow the pie to cool then dust with powdered sugar.  Put the pie under the broiler for a few minutes to let the sugar caramelize.  Keep an eye on it so it doesn’t burn. 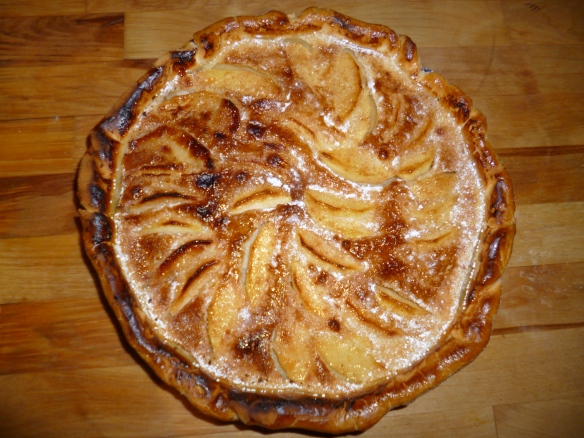 Cut into slices and serve. 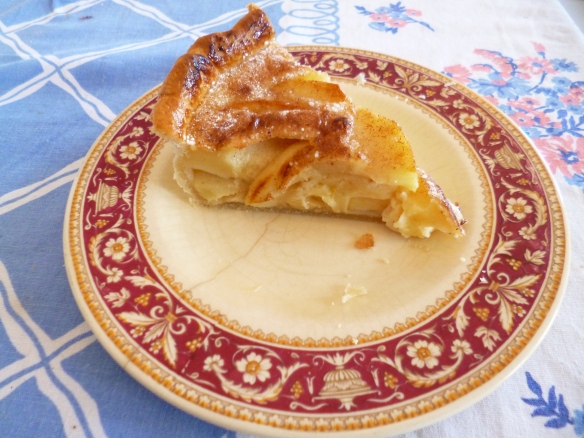 “There’s something fresh and candid, almost cheeky, in Misti’s voice; it is disarming and charming.” ~Yotam Ottolenghi

Friends of the Court